In the Rise of Empire audiobook by Michael J. Sullivan, the author takes us back to the world of Elan for the further adventures of Royce and Hadrian, the heroes of Theft of Swords. In the first two books we met Royce Melborn a dwarf thief and Hadrian Blackwater a mercenary. They clear themselves of the charges of regicide and uncover an ancient conspiracy.

Rise of Empire picks up a year after the two books of Theft of Swords left off. The Nyphron Empire has been established; the two heroes are still running errands for the Melenger Royal family and trying to save the kingdom. This is the scenario we find at the start of the narrative.

While its predecessors laid the groundwork for Sullivan’s epic world, Rise of Empire expands on it in some unexpected ways. So, it’s a good idea to note the order in which you listen to the audiobooks. The author recommends you follow the series in which they are written, and listeners will quickly see why. The two books in Rise of Empire (that is, Nyphron Rising and The Emerald Storm) are not just continuations in the story of our characters from Elan but complementary chronicles. While the books can indeed stand alone, it’s far more enjoyable to discover new things about characters and a world you think you knew.

Rise of Empire brings the battle to Melengar, a small and ancient kingdom that is in the throes of political upheaval. Princess Arista, who we remember as the headstrong girl that defies the role defined for her by her patriarchal world, enlists the help of our protagonist duo Royce and Hadrian to work behind the enemy lines. Their primary quest is to bring to Melengar the support of the Nationalists and thwart the power-hungry opposing forces.

Along the way our clever dwarf thief Royce realizes they may be pawns in an intrigue at a larger scale. An ancient wizard Esrahaddon may be manipulating them and his victory will be devastating to the forces of good that we are of course, rooting for. Unlike the more familiar main plot of Theft of Swords, there are some surprises in this one. The political intrigues of Elan really take off here and the plot moves fast for a reasonably long story. And the sub-plots also hold little surprises that hook the listener.

We see many characters from Theft of Swords reprise their roles in Rise of Empire. Royce and Hadrian are still our adventuring (and constantly bickering) pair of heroes with fun banter between them. But we realize they are not the same as we remember them. We find out, for instance, that Hadrian has a secret he wishes to conceal. Royce finds that it is an important secret that affects the political situation in Elan. This reveal adds depth and interest to characters that listeners think they already know.

Other characters change and new characters are introduced. Thrace, for instance, is now Empress Modina, a victim of the vicious power play in her kingdom. Near the beginning of the narrative, she is in shock. She is imprisoned in a dungeon and unable to speak. Enter a servant girl named Amilia, who quickly befriends the empress and seeks to get her to speak. 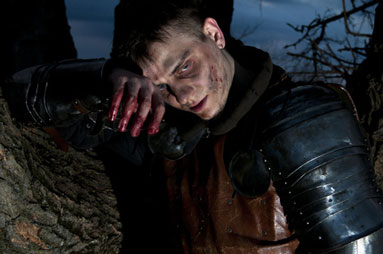 The themes in Rise of Empire are not particularly profound or even new for that matter, but they work in the scope of the story. History repeating itself is one trope that stands out, with men and kingdoms making the same mistakes and suffering the consequences. The oppressive Church and clergy and corrupt nobles go about, in their typical short-sighted ways, to covet power with disastrous consequences. There are no sweeping emotional themes of dark versus light, villainy and heroism or other grand themes of epic proportions in the story. The scope of the narratives is too small for that.

However, Sullivan works within his limited workspace and uses emotional exploration to add excitement and suspense to an otherwise light fantasy novel.

The Rise of Empire Audiobook

The two books in Rise of Empire, work particularly well in the audiobook format, as they offer fast-paced narratives that are full of action. There is also such great banter between our two heroes, which is an absolute joy to listen to. It helps that the narrator Tim Gerard Reynolds has an insight into all the characters. Whether it is a central character or a secondary one, his voice takes on an individuality, to suit the role he is playing. And just as the prose is easy to read, it is easy on the ears too.

What Works in Rise of Empire

Rise of Empire is an audiobook you curl up with of an evening, along with your cat (or choice of pet). It is like comfort food, familiarity works because of good pacing. The world of Elan may not take you where you have never gone before. It is at best a familiar pseudo-medieval world of thieves, magicians, elves, goblins, dwarves and men caught in political intrigues. But it is also an epic battle between good and evil with eminently likeable characters.

This familiar setup is also taken beyond cliches by some cleverly unfolded plot. Sullivan is a skilled storyteller in that he knows when to reveal information and when to withhold it. The politics and characters of his world are revealed in well-placed strokes with a speedy narrative. Where Theft of Swords builds the structure for the world of Elan, Rise of Empire adds depth to it.

And Royce and Hadrian may be your regular (and unlikely) pair of cunning (and charming) rogues. But they are so different that it is only natural you root for their partnership. The second book of the series fleshes out their characters with greater emotional depth and back-stories. There are also far fewer instances of deus ex machina or plain luck coming in to save the day for the heroes. This is an improvement over Theft of Swords, in which there were plenty of lucky plot devices and much less scope for our heroes to display their resourcefulness.

In the end, while Rise of Empire does not have the scope or possibly the intention to create complex, epic worlds of other, more superior high fantasy novels, it tells a great story. The Rise of Empire audiobook draws the reader in effortlessly into its world, and leaves them looking forward to the books that follow in the series.